Born 26/10/1889 in Lindsell Village. Parents were George Turner, farmer, and Charlotte Caroline (Parchment). Eldest child of three.Have b.c.BT4. . . . For his ancestors and descendants see tree at end of page

1891 Census The family were living at Near the Mill, Lindsell. He was staying with his grandparents on census day (or for longer) at Carters Farm, Bardfield Road, Stebbing.

1894. Family living at the Downs, Stebbing, when his sister, Dorothy Turner, was born, October 1894.

1899. School photos from 1899 -thanks to Stebbing Historical Society

I think that Willie and brother Harold, 1 year younger, are the 2 in the back row, extreme right . & that sister, Dorothy, 1894, could be in the middle of the front row

I think that Willie and brother Harold are in the back row of boys, 2nd & 5th from the left. Not sure on Dorothy here

1905. His widowed grandfather mysteriously remarries, in Lambeth, a neighbouring widow!

1907-1910. Served with the Essex Imperial Yeomanry and then Essex Yeomanry (TF) from 1907 to 1910. The following from an informant, Ian, who replied to a post from David on WW1 forum.: . . . 'All the references I have for him give only a single name and the identification rests on his occupation and age! William enlisted as number 1013, C Squadron, Essex IY on 12 December 1907. He was 18 and a carpenter - tying in with the information you give. He was renumbered as 213 when enlisting in EY(TF) in 1908. In the muster roll in 1909 William's address is given as Stebbing. He was discharged, time expired 11 December 1910.'

1909. He attended the Essex Yeomanry camp in Sudbury in late May. After this his 4 yr old dark bay gelding fetched 10 guineas at the end of training horse sale in Castle Hedingham

1912 . 24/06/1912. William George Turner married Edith Constance Mead in Great Dunmow Parish Church. Both ages are given as 22. His occupation is given as carpenter, that of his father, George Turner as farmer, and that of Edith’s father, Walter Mead (deceased) as licensed victualler.Witnesses are Richard  Florence Robinson, Edith’s aunt, Ellen Annie’s sister} and George Schlueter - he is with 2 of his siblings & his mother & stepfather Charles Boyton at the White Hart in Stebbing in 1911C, and he enlisted into the Essex Yeomanry with William George Turner in 1907 and was living in Stebbing in 1901C, mother Laura, 41, keeping the White Hart. . Message from Ian Wilmour: "Christian George Peter Schlueter, to give his full name, enlisted in Essex IY on the same day as your grandfather and was also from Stebbing where his mother kept the White Hart (1901). So I am guessing that they were friends long before 1912. George enlisted as number 1015 but was quicker off the mark in re-enlisting in the Essex Yeo (TF) as number 42. He was dsicharged in March 1913 and joined the Metropolitan Police in April 1913 as PC 505 in E Division. According to his nephew, Bryan, he was called up to the Army in March 1918. George's death was reported in the Essex Yeo Journal for 1957, his death being registered in the 1st quarter of 1957 in Dunmow district" . Christian George Schlueter was born Stebbing; his father Daniel, a British Subject, Publican and Carrier at the White Hart Stebbing, in 1891C, was born Germany and was drowned at sea in 1897. Have emailed his nephew Bryan 30/4/2010 and am now in email contact with Bryan's widow, Daphne]. Stebbing Historical Society, April 2013, has a picture of a Boyton Carrier wagon.

When he got married on a Monday, 24/06/1912, he was living at 49, Cobbold St. Ipswich. [1911C: family of 4 called Roper living at this address] Possess a wedding cake card from the marriage- inherited by my mother, their daughter. . MT4. The recepcion was at The Wheatsheaf - have invitation card on Edith's page.

Compulsory conscription started in 1916 for all men of his age not in reserved occupations. Stebbing Church has a Roll of Honour for those Stebbing [ but he had moved away by 1912!] men who served in WW1: this includes F & P Schlueter [ but seemingly not his friend Christian George Schlueter] and E, G, L J, R & R Lagden.

The Essex Yeomanry Museum, Chelmsford has an Obituary of William George Turner, but this turned out just to say 'In Memoriam'

Eventually, in March 2020, we discovered he was in the RN RV , actually not enlisting in the RN proper until 1918- and then quickly transferring to the RAF!

Christian George Schlueter's 1922 wedding - do not think William George Turner is in this photo.

1917, "16/12/17 To Will and Edie, Wishing you both a merry Christmas and a prosperous New Year from your affectionate bro Harold". Both this card and the one below [ in possession of Hazel Richardson] addressed to 9 Buchanan Gardens, Kensal Rise, Willesden, London. Thus seems likely that they were living in Kensal Rise from 1914 until 1917 at least. Will was maybe not around at the time of Edgar's visit, but sounds as though Edgar might have met him? Has number in Buchanan Gardens changed from 14 in 1914 to 9 here.?

1918. His wife received a postcard from L.A. Edgar, who was serving in the Australian Army with William's brother, Harold Turner,1890. " 10/2/16 Dear Mrs Turner, I wish to thank you for the way you treated me on my visit to England. I have been bad with a terrible cold since I have been back. In fact I have been nearly dead with it. I hope you and Will and the children are well. I have received my photos but had to send them all home. I am getting some more so will send you one. Yours etc L A Edgar. 8223 Pte L A Edgar 2nd Field Bakery, base 5 19th AASC. A P O 4." Although this card does say 1916, this must be wrong: from their service records, Harold Turner & Leslie Andrew Edgar only had leave in England in the last 2 weeks of Jan 1918.

He then transferred to the RAF : his number 248169, Wife Edith was living at 9 Buchanan Gardens, Kensal Rise, Willesden . He became an Air Mechanic He was discharged to the Naval Reserve on 11/2/1919 and he was deemed discharged 30/4/1920

1932.. The family have moved elsewhere in the area.. But where ?? Daughter, Joan, is sent to a Willesden Convent School, probably in Sep 1927. Also son Lionel joined the St.Martins, Kensal Rise Temperance Society in November 1925[ as a reaction to his father's drinking?]. Then, at some stage, whilst he, William George, was away working, his wife apparently decided to give up this nice house[Hazel's memories of what Mum told her -thought the 'nice house' was in Cavendish Road] and moved to Goodmayes. Family were at 42 Westwood Road, Goodmayes 1938-end 1940 at least [ daughter Joan got married from here, Dec 1940, and a postcard , recorded on her page, is sent there in 1938]. Then , & by 1942 , to Ilford. From 1944? until his death in 1958 in the upstairs flat of 87, Endsleigh Gardens, Ilford.Registers for Ilford after 1918 and Wanstead and Woodford after 1945 are held at the London Borough of Redbridge Local Studies and Archives, Local History Room, Clements Road, Ilford IG1 1EA. Search for Westwood Road, Endsleigh Gardens and Courtland Avenue[for Joan Lyons]. No Goodmayes Electoral Rolls held in the ERO.

In the Second World War it is thought that William George Turner worked away from home. By the end of the war, Joan and family moved to 92 Herongate Gardens, Wanstead Park, within walking distance of Endsleigh Gardens. So he used to visit them occasionally, and definitely for birthdays and Christmas. Then in 1953 Joan moved a bit further away, to Woodford Green, so I expect visits were less frequent. He used to tell his granddaughter Hazel that he was a mechanic when she met him, near Endsleigh Gardens, coming home from work. I also walked with Hazel through Wanstead Park to Endsleigh Gardens during the years 1950-1953. But I always thought of him as a carpenter. He had a penchant for horses, cards and drink but, in my eyes, was a cheerful soul. His carpentry tools were in my parents' garage up to 2006.

1940. His daughter Joan married but he was, supposedly, not invited to the wedding, lest he got drunk. 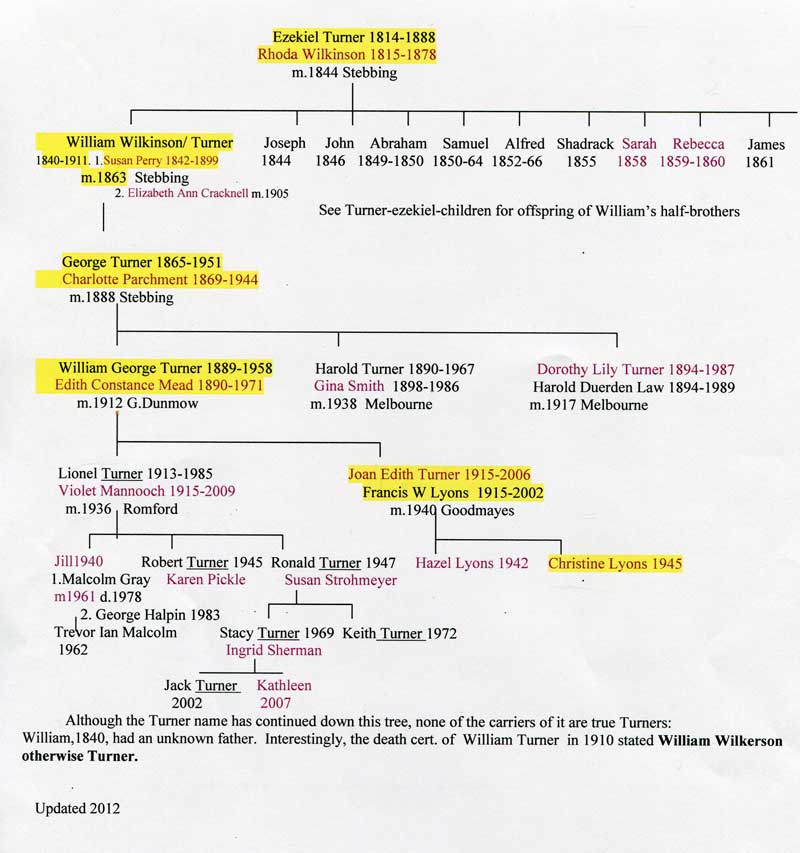